Nothing personal against immigrants or refugees since I have myself been an immigrant many times during my life, and I know that many crimes are committed by locals in all countries, for instance what sociopath Breivik did in Oslo a few years ago. However, we have to understand that refugees from very different cultures may have serious problems with integration into another country´s culture, unless receiving enough support and instructions.

Moreover, if “imported” from war zones, including countries that exploit children as soldiers, such as Kongo, please remember that many of these people are most likely deeply traumatized. This does not signify that all of these people become murderers, rapists, or pedophiles, but I am deeply devastated when finding out that in the past two years, refugees from a number of countries have committed horrible crimes in Finland. In 2015, a refugee male assaulted, raped, and burned alive his young Finnish girlfriend because she had broken up with him a month earlier. She was only 17 years old. This year, another refugee assaulted and raped a 10-year-old girl in Finland.

Since sentences in Finland are ridiculously short for rapes and pedophilia, the man who assaulted and raped the 10-year-old was sentenced “only” for assaulting a minor (pedophilia) but not for rape! Apparently there was not enough evidence to prove that he had forced the 10-year-old girl to have sex with him. As if a 10-year-old could decide for herself if she wants to have sexual intercourse with an adult man, when she is still a child!

Now our country´s Minister of Justice questions whether rape sentences should be harder in Finland. F*CK YES they should be! Pedophiles and rapists should be sentenced to lifetime in prison. It is unacceptable that men think that they can rape children, girls and women and get away with it. In Finland, the average time in prison for a rapist is less than two years. Especially if it was the predator´s first rape, he gets away with a shorter sentence. As if raping someone for the first time would be a justification to shorten the sentence.

Pedophilia and rape are ILLEGAL in ALL COUNTRIES WORLDWIDE. These are violations against human rights, women´s rights and children´s rights. All countries should take action to change and to improve their legislation regarding pedophilia and rape.

What is gender equality today, in the 21st century? Unfortunately, in many countries worldwide, the terms feminism and gender equality do not even seem to exist, have been banned from vocabulary, or are at least being hushed by majority of population, both women and men. Even in developed countries where females legislatively have equal rights with males, discrimination is widespread. For many, the word feminism seems to provoke negative feelings, whereby feminist females can be regarded as either lesbians or man-haters.

This is far from true. Those who know the meaning of the word feminism understand that feminism is a term used to describe the theory of the political, economic and social equality of the sexes Merriam-Webster – Feminism | Definition of FEMINISM. Some feminists may of course be either bi-sexual or lesbian, but the word feminism should not be confused or mixed with the sexual orientation of anyone. In fact, many men are feminists. This is not an ideology dedicated to females. On the contrary, feminism is an ideology that supports equal rights for genders in general. Regretfully, some have not internalized this.

When I on March 8th 2015 published “365 Days a Year Dedicated for Women Globally”   on LinkedIn, a post dedicated to girls and women on the International Women´s Day, not everyone who read the post were delighted about it. After publishing “365 Days a Year Dedicated for Women Globally” I received not only angry comments, but also angry personal messages on LinkedIn. The topic is so sensitive in countries where the rights of girls and women are being oppressed that even discussing or writing about it awakens hatred in people.

One of the key findings in The Global Gender Gap Report 2017 was that the average gap worldwide in terms of gender equality is 32% (31,7% in 2016). Furthermore, with the current rate of development, gender gaps could be cut out within one century. According to the report, gender inequality is costly: global GDP (gross domestic product) could see an increase of 5.3 trillion USD within less than a decade by ensuring gender equality in economic participation.

Although the Nordic countries (Iceland, Norway, Finland, Sweden, and Denmark) have the smallest gender gaps on a global level, even these countries have failed to achieve gender equality. As a result of this, Iceland has as the first country in the world decided to introduce equal pay through legislation, whereby paying one gender less than the other will be illegal. This news has been received for instance in Finland, where I currently live, with differing opinions. Some claim, without sufficient understanding about the causes of unequal pay, that “men in Finland earn more than women because they work overtime while women decide not to”, or, “men earn more than women because of choice of occupation”. This allows us to ask whether it is legitimate that traditionally male-dominated professions pay more than female-dominated professions? Is there some specific reason to pay for instance engineers more than nurses?

The realization of gender inequality in both Sweden and Finland, two of the world´s most gender equal countries, has led to the emerging of new political parties. In Sweden, Feministiskt initiativ was established in 2005 with the purpose of “opposing all forms of discrimination” in Sweden. In Finland, the Feminist Party was registered as recently as on January 1st, 2017, as a result of the realization that feminism has not been achieved in Finland. The Finnish Feminist Party states following on its website: “Conventional political ideologies have not succeeded in solving discrimination, sexism and racism, which are known phenomenons in both capitalist and socialist countries.” (Feministinen Puolue – Why a new political party?).

Equality (gender equality) truly is the unfinished business of the 21st century. Abolishing all kinds of discrimination in our societies is a responsibility of everyone, regardless of gender, economic, political, or social status. The best way of ensuring equality is to start living it, and asking ourselves what each one of as can do to contribute to an equal society where all individuals, regardless of any external attributes, can live and thrive without any discrimination. 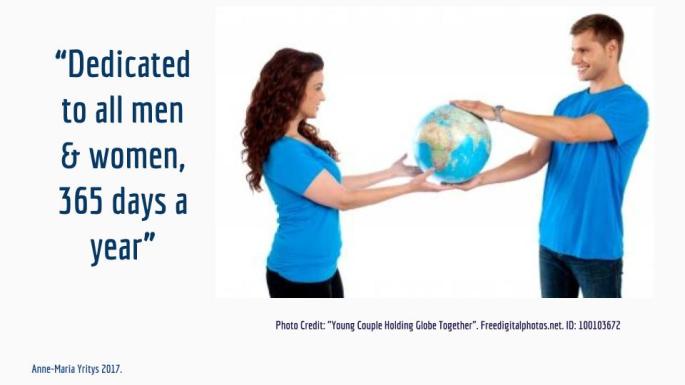 Each year on March 8th, International Women´s Day is being celebrated worldwide. Some men have asked, why women must be celebrated? Why do men have no International Men´s Day? Should we rather ask why we actually need an International Day for Women?
The purpose of International Women´s Day is to remind us all of the fact that we are yet far from having reached gender equality. Women across the world must get their voices heard. Due to many different reasons, including culture, tradition, legislature etc., many countries/societies across our globe prevent women from having the same opportunities in life as men.
What we all must understand is that empowering women through women´s birthright, Universal Human Rights, that apply to both genders, we contribute to developing a sustainable global economy, where all human beings have equal access e.g. to education and to workforce (and, a profession of their choice/level of education, knowledge and skills), narrowing down gender gaps and transforming societies to become less gender oriented.
According to research and statistics, girls and women that have equal access to primary, to secondary, and even to higher education give birth to fewer children. Not that children would be unwanted in our world, but when girls and women are economically empowered through education and through an unlimited access to the global job market/have the possibility of practicing their learned profession/becoming entrepreneurs, it has multiple beneficial effects upon societies, including better health for both women and children, and less poverty. In our overpopulated world with too many children suffering from hunger, malnutrition and poverty, it is important for parents to have the opportunity of raising healthy children which ultimately will lead to healthier economies and societies.
By giving girls and women equal opportunities and allowing females to access their basic human rights, economies and societies worldwide empower and help women to be capable of taking care of, not only their own futures, but the futures of their children equally.
What can you do as a man to help and to support an equal economy? There are countless ways of empowering girls and women, starting within the close family system/relatives/your community. Learn more about the worldwide facts regarding gender equality. Integrate gender equality into your daily life at home, at work, in your community. Understand that empowering girls and women will benefit men as well, when responsibilities are distributed equally within homes, and in working environments.
What can you do as a girl/as a woman? There is no simple response to this question, since the state of equality between genders varies from country to country. I could write, learn and be aware of your (human) rights as a girl/woman, but it is not that simple taking into consideration that currently not every girl/woman is aware of their Universal Human Rights. How can you empower yourself to take action for improving your life as a girl/woman if you are unaware of your basic human rights? However, those girls and women who are aware of their basic human rights should claim access to those fearlessly, empower themselves and other women to become active citizens of the world to make their voices heard and contribute to an increasingly much democratic world where both men and women can live up to their full potential as equal human beings.

Note: If you found this article helpful, give it a thumbs up and feel free to share it on your social media networks. Please also share your ideas/thoughts about the topic. I would love to read your thoughts about gender equality and how you/r organization contributes to narrowing down the gender gap and creates a democratic environment where everyone has an equal voice, regardless of gender.

For more articles upon sustainable economic development, human rights, and leadership, do subscribe to upcoming posts.

and connect on Facebook, Instagram & LinkedIn. If I am unable to accept your contact request immediately, just press the connect/follow button and I will get back to you. Thank you. 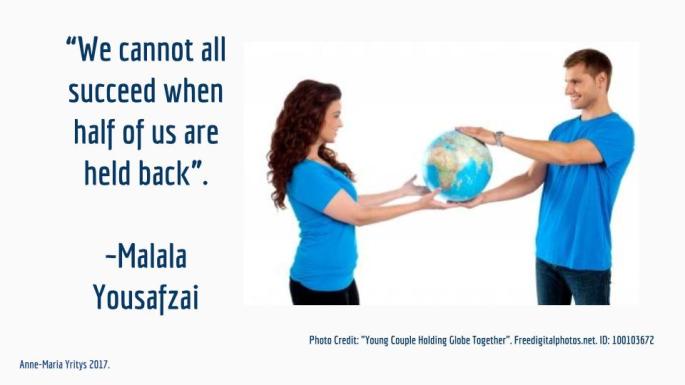 Together We Are Stronger 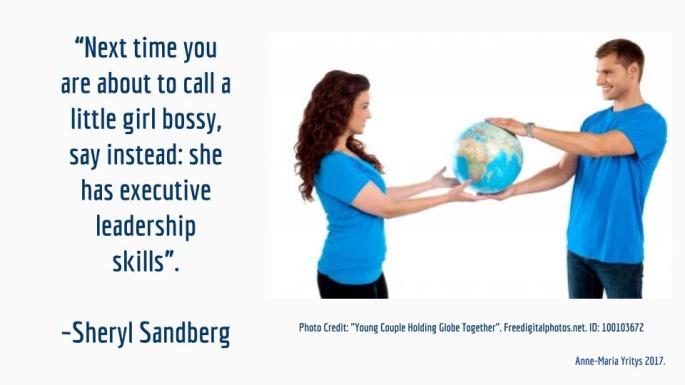